Merlin recently completed construction on a new custom home build at The Summit, the most exclusive private club community in Summerlin, Las Vegas. Named Five Elements, this spectacular custom home was designed around the Chinese Theory of Five Elements, a philosophy which states that everything in the universe is based on the interaction of the five fundamental elements – wood, fire, earth, metal, and water – which all must interact in harmony to achieve balance in life. In addition, the home was designed and built to strictly adhere to the Chinese practice of Feng Shui in which a site is chosen and a structure is configured to harmonize with the spiritual forces that inhabit it.1 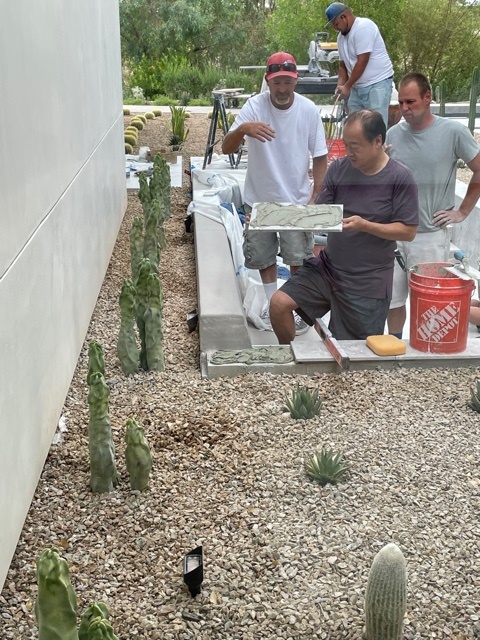 “We are proud to have been chosen by the builder for this distinctive home,” said Steve Jones, Founder & CEO of Merlin Custom Home Builders. “We worked side-by-side with the architect and the homeowner throughout the build to ensure that our processes coincided with the homeowner’s beliefs and that this unique home not only meets, but exceeds the homeowners’ expectations.”

The homeowners started planning for the home in 2015. At their request, the groundbreaking and accompanying Feng Shui ceremony to bless the home was held on April 19, 2019 – deemed the best day for this particular home. The first indoor Tundra Grey tile was installed by the homeowners on June 18, 2020 and the last was placed almost a year later as shown in the photo. The certificate of occupancy was received in early May 2021 and, according to the tenets of Feng Shui governing the best day to begin residency, the homeowners began sleeping in the home on May 18, 2021.

Designed by Las Vegas Architect Eric Strain and his Assemblage Studio, Five Elements is a two-level, 11,000+ square foot home which soars above The Summit’s golf course, creating a dramatic statement from afar. Inside the home, comfort is added to expansive spaces by incorporating rich beautiful woods along with water, concrete, metal, and fire features.